How can the chocolate industry support cocoa farmers?

Cocoa is cultivated by around 5.5 million smallholder farmers around the world, and directly or indirectly impacts the livelihood of over 50 million people. A large part of them are located in West Africa, with Côte d’Ivoire and Ghana producing about 65% of the total supply.

For farmers of those two countries, cocoa is often considered the “most valuable crop”, but in those rural areas which are often the least developed, “most valuable” doesn’t go a long way.

While analysis of those numbers and whether they are below the World Bank poverty lines and other KPIs may vary, it is widely accepted, included by the chocolate industry, that cocoa farming households are not living “sustainable livelihoods” and that income is a large part of the problem.

In the recent years, there has been some increasing awareness that something needs to be done to lift cocoa farmers out of poverty. Governments are trying to guarantee higher prices for their farmers, chocolate giants are funding research studies on this topic, certification programs are incorporating income into their schemes.

So where is that coming from? 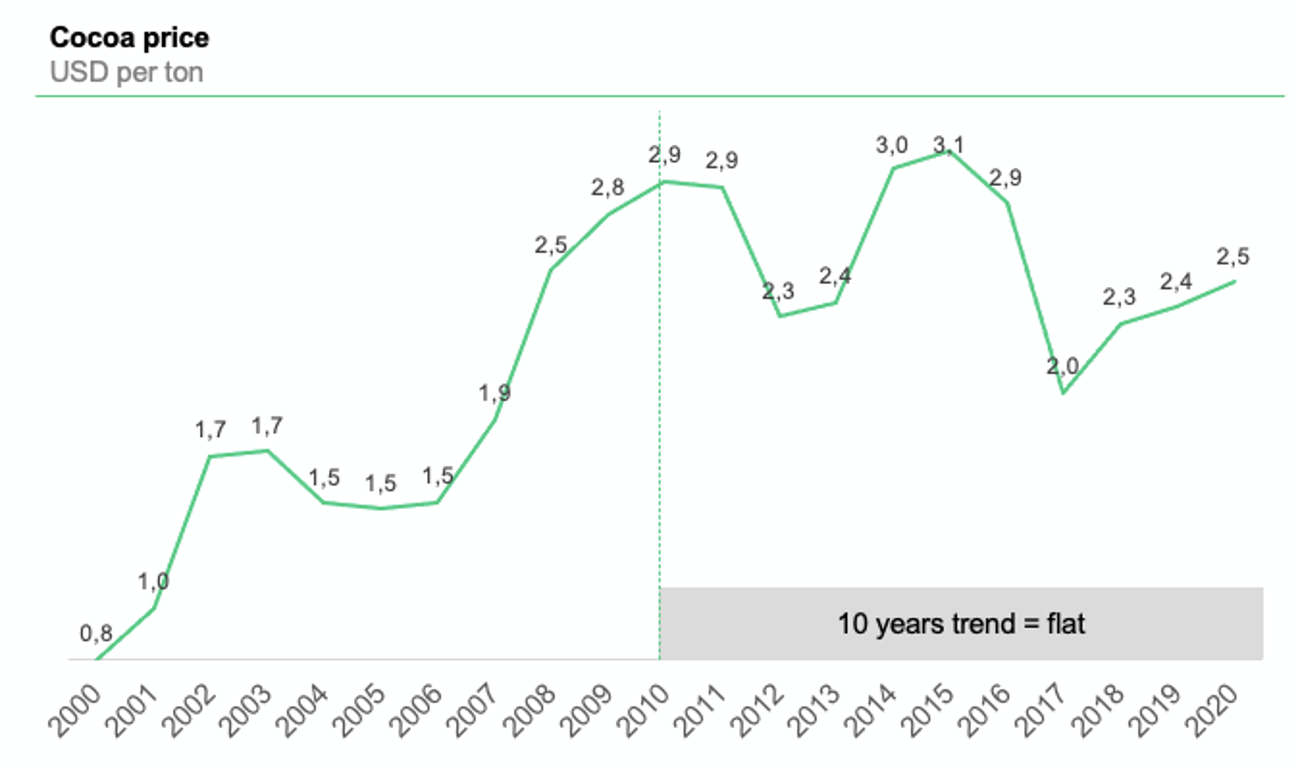 As for most commodities, its price is fully driven by  supply and demand dynamics, as reflected by the “stocks to grindings ratio”. When a slowdown in demand is observed at the same time as a bumper crop, price can drop heavily and fast, as it did in 2017 by 30%.

Overall, the trend over the past 10 years is flat in nominal terms, and the International Cocoa Organization (ICCO) “believes that consensus exists" to say that cocoa prices are structurally too low. “For 30 years, the price in constant dollars has been divided into four, "Michel Arrion, its executive director, told AFP in 2019.

In reaction to this trend, Côte d’Ivoire and Ghana teamed up to set a minimum cocoa FOB price of $2600 per ton in June 2019. But their negotiations with industry partners didn’t come through, and they replaced it by a Living Income Differential (LID) of $400 per ton a month later. The LID is supposed to be paid as an extra on top of cocoa futures prices, to both the Ivorian and Ghanean cocoa marketing board.

Both countries have a similar process in place for cocoa marketing and trade: every year ahead of the main season, a committee fixes the farm-gate price for the next campaign. The marketing boards act as an intermediary between the producers and the industry and take a margin which corresponds to the gap between the farm-gate price and the price of the futures contracts at which they sold the harvest in anticipation.

Following the announcement of the LID, both countries raised their farm-gate prices:

The current price levels in dollars are similar to those observed in 2015, which was the highest market point in the past 20 years.

Though, floor prices of about $1800 per ton in both countries are still regarded as insufficient. A study from Fountain and Huetz-Adams in 2020 has estimated that prices required to make a living from cocoa are $3116 per ton in Ghana and $3166 in Côte d’Ivoire, so about 78% more.

Market prices are obviously the biggest driver of the gap, but the role of the country marketing boards and how much margin they take can also be questioned. Indeed, in other countries, both in and outside West Africa, farmers receive a much higher share of the market prices.

Conversations around income are based on various modelling efforts that have been conducted by NGOs, researchers, or consulting firms, sometimes with funding from the industry. Most prominent studies are:

Published each year by the Voice Network, which describes itself as a group of “NGOs and Trade Unions working on sustainability in cocoa”, it featured in its 2015 edition an estimate of cocoa households revenue:

These calculations were based on an assumptions that:

Values were taken from literature review of papers dating back to 2008 until 2014. In its 2018 edition of the report, the Voice Network replaced this analysis by an estimate of $0.78 / person / day for both countries.

FairTrade had a study conducted by the social enterprise TruePrice in 2016, covering 3235 farmers in Côte d’Ivoire. The study concluded on an average income of $2707 / year and a median income of $1919 / year where 74% comes from cocoa, for participating cocoa households and for about 8 family members.

This study, conducted in partnership with the Lindt Foundation, and the certification programs Rainforest Alliance and UTZ, covered 1500 households in both Côte d’Ivoire and Ghana, and estimated revenue:

The gap with the Cocoa Barometer model of 2015 mainly comes down to (i) the difference in hypothesis on how much revenue comes from cocoa, as KIT’s data amounted to 66% and 61% respectively for Côte d’Ivoire and Ghana, and (ii) the methodology used to account for household members, as KIT divided by the square root of the number of dependents instead of dividing by the number of dependents as other studies are doing.

Although the conclusions of the various studies can differ to large extent, especially when it comes to the calculation of the daily income per person, the numbers for the average annual revenue from cocoa in a household are somewhat consistent, ranging from $1700 / year with the 2015 cocoa barometer to $2700 / year with AFD / Barry Caillebaut with intermediate points at $1900 and $2000 for the 2 other studies.

Calculations of total income per person per year is somewhat more variable, and so are the following discussions of what part of the households are below the World Bank poverty line of $3.10 per day and extreme poverty line of $1.90 per day. In any case, it is widely acknowledged that such revenues are insufficient for the farmers to invest in their future and in their farm, and instead maintain them in a vicious cycle of poor farming techniques and inputs yielding poor outputs and low volumes.

This is where certification programs are supposed to come into play, ensuring better living conditions for the farmers, as well as access to improved farming techniques and equipment through the cooperatives who manage the funds from the premiums. But is that really the case?

According to Fairtrade, in Côte d’Ivoire, only 12% of the certified farmers earned a living income in 2018, and the Cocoa Barometer calculates that the financial benefits of certification before deduction of costs are between $150 and $200 per ton, at best increasing a farmer’s income by 10%. Labels have different rules for farmer’s income:

Maybe even more worrying, labels and certification programs have been called out for their inability to ensure that their certified cocoa is free from child labor, an issue which is closely tied to income. Indeed, a study published in 2019 by the University of Arkansas estimated that eliminating regular child work in Ghana’s cocoa farming practices would require only a 12% price increase.

According to a report published by the National Opinion Research Center at the University of Chicago in 2020, 1.5 million children are working in cocoa production in Côte d’Ivoire & Ghana. While not all forms of child labor are a concern, since it can be commonplace for children of farmers to contribute to housework on their free time while attending school as they should, the “worst form of child labor”, where children are unschooled and perform hazardous tasks, is still widespread in West Africa, and still can be found on farms that are certified, as revealed by the Washington Post in October 2019.

What can be done? 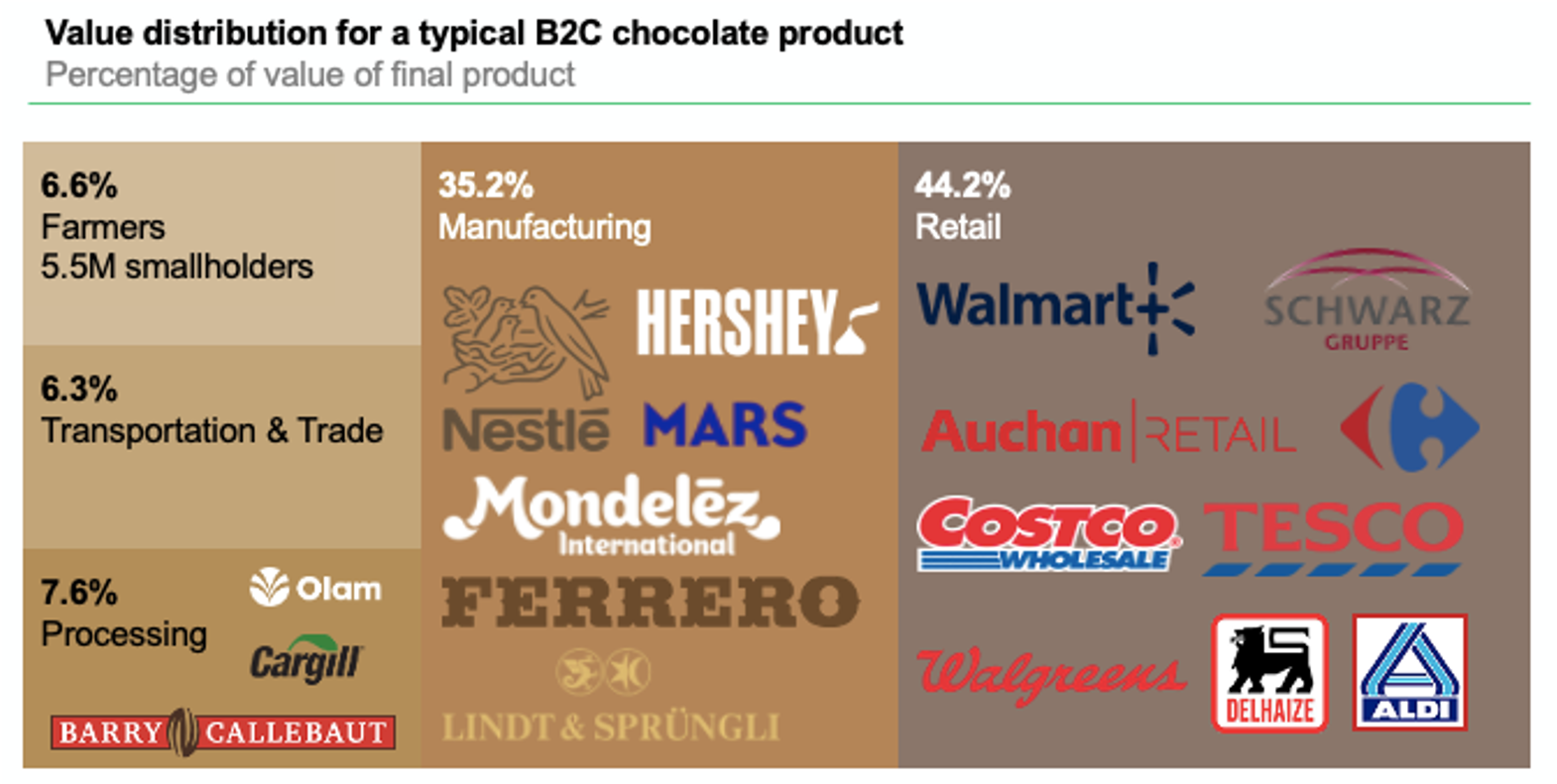 According to the cocoa barometer published in 2015, which was a peak price for cocoa futures, cocoa farmers revenues represent only 6.6% of the total cost of a chocolate bar.

Sad news is, this is not a lot, and this is not improving. In 1980, the farmers’ share was 16%. Good news, however, is that this means that if we were to double the income of cocoa farmers, reaching a farm-gate price of $3600 per ton (well above the $3200 estimated as required to make a living by Fountain and Huetz-Adams), it would increase the consumer price by only 6.6% or $0.13 for a typical, decent quality $2 tablet. A markup that increasingly conscious customers could probably accept it that was properly marketed to them.

According to the cocoa barometer published in 2015, which was a peak price for cocoa futures, cocoa farmers revenues represent only 6.6% of the total cost of a chocolate bar.

Some niche products have already taken this approach. Ethiquable, a French cooperative, is paying its farmers well above market prices and is one of the only companies sourcing organic cocoa from Côte d’Ivoire, where conventional, mass-market production dominates. Created in 2006 with 37 farmers, the cooperative has 250 members in 2021. Higher revenues benefit the farmers themselves, who have more resources to pay for health fees, or school fees for their children, but also the community; a maternity was built with the funds.

Is this possible at scale? One of the issues with large-scale price increases is that it prompts farmers to reinvest their extra earnings into increasing their production volumes in order to grab more of the price increase in the following years. This is a threat to the remaining forest in those areas, which has been very severely damaged by cocoa cultivation: since the 1950s, Ghana and Côte d’Ivoire have lost respectively 80% and 70% of their forest cover, with 27% and 38% of the deforestation associated with cocoa cultivation. This is also a threat to price itself, as large, non-coordinated production increases create oversupply which ultimately is poised to decrease price in a liberalized economy.

Ultimately, cocoa farmers suffer from the “smallholder farmer” issue: with a cocoa surface ranging from 2 to 5 hectares on average for most of them, and many dependents, productivity improvements and price increases can only marginally improve their living conditions. In the long run, it is probably necessary that farms progressively consolidate so that the average farm size can increase and reach a threshold where cocoa cultivation, rewarded at fair prices, can yield sufficient income for cocoa households.

This is possible only if opportunities are available outside of cocoa farming, so that some farmers can quit cocoa farming and take on other activities; which is a broader issue of economic diversification.

In the meantime, consumers can help by choosing ethical chocolate which, besides granting higher revenues to the farmers themselves, is usually linked with an investment in the communities and higher schooling rates for the children, hence ensuring a better future for the generations to come. 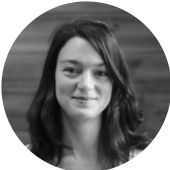 Cécile Maurisset is Project Lead at ShARE and our expert on agriculture value chain.